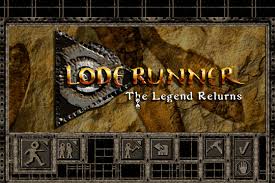 A concept almost as old as Pong, the Godfather of nowadays gaming. You climb up and down little ladders, collecting various forms of loot. And guess what - you’re being chased by blood thirsty (well yeah, sort of) eurhm, red humanoid shaped things. On your way through each puzzle, there are multiple ways of dealing with them. From digging a hole and watching earth grow as fast as it can, squashing the enemy, to picking up little and very big bombs. Of course, the objective in each level is to collect all loot displayed and get the hell outta there.

Simple, yet effective and above all: very addictive if served right. And believe me, this one is. Based on the classic “Lode Runner” principle explained above, Lode Runner: the Legend Returns indeed returns to keep you occupied for as long as needed. The game improves and extends the core game mechanics with extra tools to get rid of enemies (and friends by accident when playing cooperatively, whoops!). Every few levels, the big “tileset theme” changes, together with a very nice soundtrack. The area’s differ from jungle to cave and icy mountains. All enemies stay the same though: red and hungry.

Create your own Adventure

The Legend Returns - with a level editor. You can choose your prefered tileset and draw/place away. Every home made level can be shared using, … well, non-automatic methods. The game stores all levels in a single PZL file. Don’t forget to download ours! Made a long long time ago… Oh and you can play every custom level with a friend, locally or via a prehistoric 56k modem way. (so forget that). The game comes with a friendly User Interface, including popup balloons, instructing the player which button to use for which action. Nice and clear.

Don’t expect a story or something similar. It won’t be anything closer than the wide variety of different themes (I think eight in total). In fact, the “single player” game is just the puzzle file the game developer(s) (most work has been done by one single person, Todd Daggert) put together for you to wade through. The first 10-20 levels are very easy and many don’t even contain enemies, but as soon as you start hitting 60, prepare to press the “use item” button a lot. Some smart level design here and there make you curse and restart the game, but then again, there’s nothing much to it except blocks, earth, non-destructable floor, rope, etc…

The best part of the game? Easily the fact it’s fully downloadable for free right now, plus the cooperative part. Or rather, “friend or foe” part, since digging a hole might get your partner stuck, so think carefully before doing something stupid! Follow the links at the Lode Runner index page to download the whole game. “Lode Runner Online”, the multiplayer enhanced semi-sequel is also downloadable for free, so be sure to check that one out too. Review-Cat says: Like co-op action? Love creating your own stuff? Enjoy puzzle games? Don’t mind downloading a game for free? You know what to do..