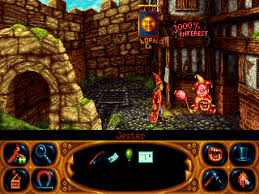 Simon the Sorcerer II: “The Lion, the Wizard and the Wardrobe” is an adventure game from the British game company Adventure Soft who also produced the prequel, Simon the Sorcerer. The Simon adventure games are well known for their absurd and mostly weird British humor. If you do not like Blackadder and company, don’t bother installing this game. Simon 2 features many references and funny jabs to to popular literature, pop-culture, fantasy and other adventure-games. You can clearly see the subtitle is being borrowed from The Chronicles of Narnia, and there are plenty of references to Lord of the Rings, Monkey Island and even Dungeons & Dragons. However, do not expect this adventure to be over in a couple of hours since Simon the Sorcerer 2 is actually quite hard.

Simon is not your average protagonist. One of his most beloved hobbies is insulting people and getting on their nerves, which most of the time successfully applies. Simon the Sorcerer is an arrogant sorcerer who is unluckily teleported to this fantasy Dimension by a young boy, Runt. When Sordid, the evil boss from the prequel, decides to get rid of Simon for good, things are about to fire up real good. Most characters from Simon the Sorcerer I return and sometimes the plot is unclear so be sure to play the first game before installing the sequel.

Simon loves to harass innocent people, this is an integral part of the humor carefully weaven into the main game. In most other adventure games, you’ve traditionally given the option to answer a couple of “straight” questions, and a couple of stupid ones. In Simon, you mostly answer sarcastig, ironic or plain brutal. It sometimes made me laugh out loud, but the humor is classified as either love it or hate it.

Instead of playing a role as the protagonist in the game by moving him around, picking stuff up and solving puzzles, Simon also talks to you - the player. He sometimes makes sarcastic jokes about people walking by or talks to himself. When you’re not actively doing anything for a few minutes, he’ll lean forward, looking out of the monitor screen, trying to figure out whether you’re alive or not. Ha!

And with The Hunt, I really mean the hunt. The hunt for the lost pixels! Because that’s wat Simon the Sorcerer 2 is mostly about: finding stuff, sealed away in background layers, carefully put aside. Simon 2 is just like its predecessor a painfully difficult game (at least in certain locations). You will find yourself cursing this idiotic sorcerer quite a few times. Thankfully, most characters in the game can provide you critical information on what the hell to do next. Most puzzles in Simon 2 are not as difficult as the first one, but not easy at all.

Thankfully, Adventure Soft got rid of the strange minor changes to the classic SCUMM engine controls. I’m of course talking about the in-game actions you could perform in Simon the Sorcerer 1: Wear, Consume and those keywords. Simon 1 tried to separate itself from other well-known Lucas Arts adventure games by changing those keywords but this had a reversed effect. Most keywords could be simply replaced by Use anyway. But not to worry, this all has been gone and forgotten, and replaced by mostly clearly pictured icons. Talk is of course the mouth icon, but the first few hours you’ll be wondering what the heck the Hat icon is about.

Nothing really worthwile has changed in Simon the Sorcerer 2, except for a completely new story line. The graphics are still colorful quirky sprites - which is a good thing - and the music still consists of excellent made tracks. I can’t really place it but the sound track can be seen as good and bad. Good because it gives you a nice distinct feeling and the tunes fit in every scene. Bad because they get repetitive after a while (thus not very long). If you manage to breeze through the game in no-time, the sound track will still manage to create a couple of tune memories.

The humoristic approach is not new either, but that does not matter: after the first game, you’re left with a big ugly dark hole which screams I want more!. Simon the Sorcerer is a classic point and click adventure game, but also is not. It may look like an excellent child entertainer but it really is not, the insiders and funny reference stabs are the biggest part of the game. The only bad part about Simon can be applied to other adventure games too: it is sometimes inevitable to perform a full screen scan in order to grab all the stuff you’ll need.

Simon the Sorcerer 2 is an excellent follow-up to an excellent adventure game with excellent humor and excellent puzzles. The only downside, compared to the first game, might be the voice acting of Simon himself - the original voice actor has been replaced. You’d expect Simon’s voice to be witty and charming since Simon 2 should be a more a grown-up version of Simon 1. After all, it has been quite a few years for Simon to hit the computer screens and puberty can be an ugly thing. But instead, you’ve given the same teenage wannabe sorcerer with a snidey and whiney voice. Can’t beat them all, can you… For the record: Simon the Sorcerer 1 is unable to produce subtitles and voice acting at once - it’s either the lovely voice or the stupid text. For us non-Brittains this can be a pain in the ass, some sentences are difficult to understand. Simon the Sorcerer 2 does feature both, luckily.