I’m getting fairly tired of defending Arcanum on various cough, console lovers message boards and against friends. Everybody seems to prefer Oblivion-style Roleplaying gameplay mechanics. Fine by me, but don’t try to piss RPG Codex members and me off by complaining about the bug fest in Troika’s games. During my more than 5 playthroughs (admittedly never got to the finish, fooling around with different characters is even funnier), I never encountered a single “bug”. Except the obvious not-so-finished questlines in later stages of the game. Point the finger to the publishers, not to Troika. Because, in Arcanum, everybody reacts on everything in a unique way. No NPC interactions are scripted (as seen in the NPC Interaction tests)! This makes debugging a more than difficult task of course. Read the interview for details. Here’s the most important part, carefully preserved for future quotage:

What the player experiences: You were told that the wealthy owner of the Inn can help you find the buried treasure. You walk into a bar. The bartender greets you with a fine “Hello Stranger! Come and enjoy a pint of ale on the house!” You will notice that you when you click on anyone else in the room you get a generic “good day sir”, you certainly can’t attack anyone, and if the game let you fire off an explosive spell, it wouldn’t do any damage in room and no one would notice that anything had happened. You talk to the inn keeper and he says if you give him 10 gold, he’ll give you the map to the secret treasure! So you do.

What the developers were thinking: Well, this has to be this way, right? I mean, the bartender has knowledge that keeps the quest moving along so we can’t kill him. And what if we attacked someone else in the corner of the bar? We couldn’t have that because it would look strange if the people just sat there! And I mean, c’mon, if you can kill this guy, wouldn’t that mean you can kill the others too? Oh plus, our publisher informed us yesterday that we have to take out all the kids in the game because we can’t sell the game in Germany if it has kid killing. Yeah….. killing people in a friendly town is out of the question.

Let's kill her. I hope her husband will be happy.

What the player experiences: You walk into a bar. The bartender greets you with a fine “Hello Stranger! Come and enjoy a pint of ale on the house!” At this point, you shoot an arrow through his neck…. he drops dead, the bar maid and most of the patrons freak out and run for the door… You laugh maniacally until you notice some guy in the corner (who happens to be the bartenders' brother in law enjoying a pint himself) unsheathing his vorpal sword and coming after you with bloody vengeance in his eyes… You kill him too and take his sword. You search the inn and find a key underneath a bottle of whiskey behind the bar. The key opens a lockbox upstairs in his room where you find a map.

What Troika was thinking: Hey, what if I want to shoot the bartender? Yeah, I hate those stereo-typical jolly fat bartender guys. It’ll be more trouble, but we’ll make sure you can get the map some how. For the people in the room, we’ll have them check against your faction and skills, if you attack anyone, they will determine if they are scared, hostile, or unmoved by your actions. If they are scared they’ll run, hostile they’ll attack, and unmoved they will just sit there drinking a beer while all hell breaks loose. Yeah, we should put at least on guy in the bar who’s tough as nails. The tough quiet dude who calmly drinks his beer… The guy you DO NOT want to mess with. Yeah, and if you kill anyone in this inn, the cops in town will attack you on sight. The more neutral shopkeepers will still sell to you, but they will jack the prices up because even they think you are a cold blooded killer.

Now, the Troika way is much more difficult to implement. All RPG fans will notice that Troika games are often times buggy. The Troika way is much harder to test because of all of the possibilities within the game and the level. When the game is near completion and you need another few months to make sure it’s tight and bug free, the publisher will rarely give you the time or money to make it happen. Many times, Publishers underestimate how difficult it is to test a game this open ended and they don’t give you proper testing resources. This was the case for Arcanum and Temple for sure.

In the Publishers defense though, you did say it’d be done at a certain date, and if it’s not, it’s normally no one’s fault but the developers. Publishers plan on releasing certain games at certain times. You can’t have your game come out right after a similar title because it might get buried. There are even deeper layers that the publishers have to deal with like reserving certain times for the game to be pressed. If you deliver the final version to the reproduction facility in October instead of September, they may be busy and will charge you much more for the rush delivery and overtime. Never forget. And stop complaining. By the way, I’ve seen the future, isn’t that cool? 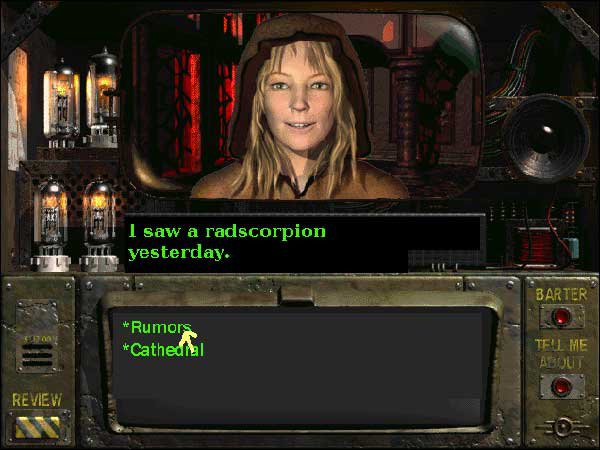 Wow, Fallout 3 is going to be awesome! Isn't that right, Bethesda?.
Categorized under: Fallout Troika

I'm Jefklak, a high-level Retro Gamer, and I love the sight of experience points on old and forgotten hardware. I sometimes convince others to join in on the nostalgic grind. Read more about The Codex here.

If you found this article amusing and/or helpful, you can support me via PayPal or Ko-Fi. I also like to hear your feedback via Mastodon or e-mail: say hello. Thanks!