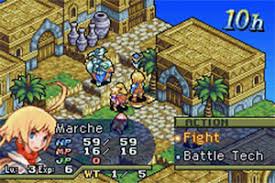 Since the Nintendo DS has been released a couple of years ago, many game related websites predicted a quick and painful death for the Gameboy Advance. Thankfully, none of those predictions made it into reality since the GBA library is still steadily growing, although a whole lot slower than in 2002. Nintendo’s smart marketing ideas enabled the DS to play GBA cartridges which indirectly prolongs the overall GBA’s life. Therefore, a lot of potentially great games have been released but mainly ignored in favor of less entertaining DS games. So let’s take a look at the most impressive GBA Roleplaying or Strategy games!

Of course no console or handheld’s RPG collection is truly complete without any Final Fantasy spin-off or port. The Japanese GBA library today includes FF I and II: Dawn of Souls, FF IV, FF V and FF VI. The last one will be released within a few months in the USA. The only missing Final Fantasy number is III, which is ported and recreated to the DS. I and II are bundled together in a complete package. But this package is mostly for FF lovers out there, because the game lacks pacing and the battle sequences are ridiculously easy compared to other Squaresoft games. IV suffers from little annoying glitches, the port is not so well-polished as we had hoped.

This leaves us with V and VI. Most people would probably agree VI is the superior one and one of the best FF games in the series. But you can’t play it yet on your GBA unless you’re Japanese. Final Fantasy V includes a complex job system first introduced in III, similar to Final Fantasy Tactics. You can swap jobs and keep certain special abilities, this enables you to build the ultimate magic swordsman. Good enough for more than 30 hours of handheld Roleplaying goodness. If you’re looking for a handheld FF game, V is the game to get.

Fire Emblem and Sacred Stones on the GBA. Thank you Intelligent Systems!

Next up, the popularity gaining Fire Emblem series from Intelligent Systems. You should remember Intelligent from the more than excellent Advance Wars Gameboy Advance Turn-based games. Fire Emblem is the equivalent in a, well, more Fantasy-ish setting. In FE, you guide a devoted team of warriors, priests, mages and more to victory and reclaim the land (or cleanse the evil spirits, heh). If you’re looking for more gameplay related information you should read the Fire Emblem Wikipedia entry.

Two Fire Emblem games made it to the Gameboy Advance, and even Europe (woah! We get something good…) and one recently to the Nintendo Gamecube. Because of the overall lacking Strategy RPG games on the GBA, FE was more than welcome and it shows. Both games are excellent and very well suited for mobile gaming, although some missions tend to be quite long. Thank you sleep mode. Sacred stones is arguably an overall better game due to the small class tweaks but it’s a lot harder than the first GBA game.

Developing your main assault team is one of the highlights of the game. It gives a lot of satisfaction to transform a regular soldier into a sword master +33% critical hits? Hell yeah! But watch out though: once a character dies, you won’t be seeing that one in the future: once dead always gone. Choosing between both games can be difficult, but I’d be safe to say both are very good GBA picks. If you never played any Fire Emblem game before, pick up the regular one (Fire Emblem, without the subtitle. In Japan, more than 4 FE games were released on SNES and sadly never translated).

One of the underdog highlights of the whole Gameboy Advance library is without a doubt Atlus’ Tactics Ogre: Knights of Lodis. Before we continue to hail the game, let’s straighten up one thing: No, it’s not better than Tactics Ogre: Let us Cling Together. But yes, it’s one of the best time-soaking GBA games. Especially if you love turn-based Strategy RPGs or like to customize your characters. Sadly, the game was never published in Europe, but I doubt that would dramatically increase the game sales. It’s one of those freaky hardcore in-it or lose-it games.

There is so much unseen depth kindly woven into the game it almost blows my mind. You basically play it like any other Strategy RPG game: by taking turns and eliminating the enemy troops. But on the way you can cast devious spells to distract distant enemies or hire hawkmen to swiftly fly over hills, positioning them out of range and firing arrows without taking any hits. The only downside about TO is the overall slow gameplay: movement animations advance kind of slow and playing just one battle can easily take up to two hours. That’s also an advantage of course.

And then there’s Final Fantasy Tactics Advance (FFTA). As you can see, the game borrows most of the graphics and gameplay mechanics directly from TO (no wonder, most of the team members were shifted onto developing FFTA). Indeed, FFTA mostly plays the same (yay!) but Squaresoft managed to screw up the gameplay real good by adding judges and judge cards (nay!). For instance, after entering a battle, there’s a card which says “Forbidden Bladed weapons”. If someone (including the enemy) attacks using a sword or katana, you’ll get a yellow card. After 2 yellow cards you get thrown into jail and your buddies can go bribe you out. Fascinatingly frustrating, especially on missions where enemies are beasts and there’s a “Forbidden beast damage” card.

Not only that, FFTA is very very easy compared to Tactics Ogre. And the music gets so repetitive after a while, argh. Oh yeah, and the game lacks a good story line. Pick Tactics Ogre above it all day long, but if you’re hungry for more, FFTA might be for you. Or maybe not.

Sting’s GBA debut, Riviera: The Promised Land, is in it’s heart a Strategy Roleplaying game. But it utilizes some very weird and uncommon gameplay mechanics - that’s not directly a bad thing. Once on a mission, you travel through many set scenes without directly controlling the protagonist. How’s that? Say you landed on a deep forest. There are 4 “actions” to do: Look at grass, Go North/East and Open Chest. By executing one of those actions you lose action points (which can obviously be refilled). The grass may reveal a hidden item, but may contain a poisonous snake. Same story for the chest. This makes Riviera very linear (there are some secret places all right) but at the same time makes the game more enjoyable for a handheld system to play in quick bursts.

Once you’ve entered the battlefield, you can assign up to four members to fight (north/east/south/west) and up to four items to fight with. Every time you use an item, the item’s durability counter decreases by one. If the counter hits zero, the item is gone forever. That sounds quite awkward and it really is: don’t directly use all your powerful items before any boss encounter! The bad part about the whole item stuff is you can only carry 30 items at a time and you cannot sell any of them! In towns, navigation is the same as the missions, with unlimited action points.

On the other hand, there’s the very recent Yggdra Union: We’ll Never Fight Alone Strategy RPG game, also from Sting, published by our God Atlus. The game is a Tactical RPG in the vein of the Fire Emblem games, with an overhead view of a 2D map, managing miniature versions of your units. However, aside from the map view, it is quite different. A card system dictating your movement and potential skills plays into both enemy and ally turns, as well as the “Union” formation system, in which massive battles can take place between several platoons.

Both games are quite different than traditional SRPG handheld or console games and both games have the same extremely high quality audio and amazingly done sprite work. If you’re looking for something different than Fire Emblem, but still utilizing the same core thoughts, definitely consider Yggdra Union.

Camelot’s attempt on a traditional/retro console Roleplaying game was very Enthusiastically received back in 2001. Golden Sun is in essence a contemporary presentation of the traditional console role-playing game formula, where the player guides a cast of four characters as they journey through a fantasy-themed game world and interact with various Non playing Characters. Golden Sun also “features” random battles (good or not), just like the Final Fantasy and Dragon Quest series. One of the strongest points of the Golden Sun series is the strongly embedded puzzle aspect of the game.

Many of these puzzles revolve heavily around the usage of the game’s resident form of magic spells, “Psynergy.”. Whereas most other RPGs limit the usage of their forms of magic to battles as offensive and defensive measures, Psynergy spells can be used both for battle and for solving puzzles in the game’s locales. By far the most important element in Golden Sun to differentiate it from other RPGs is the collecting and manipulation of magical creatures called Djinn. These Djinn creatures can be found everywhere in the Golden Sun world and can severely change your battle strategies, as you can of course use them to empower your Psynergy spells during fights.

Addendum: To be continued with Mario & Luigi: Superstar Saga e.a.!