On Killing a Lich 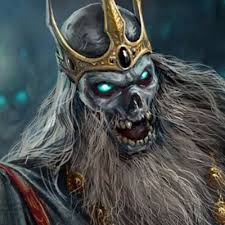 On Killing a Lich

Both old school and modern roleplaying games feature many times at least one “Lich” entry. And the evil spellcasting undead creature will almost always kick your butt without proper protection. And why is it that so many big boss battles featuring some kind of super evil incarnation always have to transform into even worse enemies? Even Ganon tricked me in A link to The Past, although he is certainly not classified as Lich. Every variation of a lich encounter in most games will send you raging like mad - or maybe this is just me.

Perhapst the most well-known Lich there is to date is our dear friend, Kangaxx. He starts out as a “regular” Elemental Lich, previously encountered in Athkatla’s gate district (or maybe not yet). In Dungeons & Dragons terms, this means Kangaxx will start out as a powerfull undead spellcaster (yes, level 9 spells) which is completely immunte to spell levels 5 and down - including Breach. That’s pretty painful on it’s own.

But wait, it gets better. After you managed to beat him, he’ll transfer into a demi-lich. Demi-what? Immunity to spell levels 9 and down, immune to all +4 and down weapon enchantments. You will not only be unable to damage the guy, he also has innate abilities to crush your party in seconds using Trap the Soul and Demilich soul. Lean your lesson, reload, and come prepared. Enough Spell Protection scrolls, for instance.

Liches are (very) tough guys, this is nothing new(s). Being able to actually play as a lich in your favorite Handheld game may be. Using the secretly acquired Ring of the Dead you can - once you’ve met the proper requirements - transform your generic spellcasting character (even NPCs) into a Lich. What’s the big deal? Equip a lich with a glass pumpkin. You’ll know why. Spellcasters are known for their big long ranged offensive powers - but also for their weakness: defense and health. Scratch those last two if you’re a lich (In Tacics Ogre: Knights of Lodis anyway). It’s completely possible to send out major pain to your enemies in the front lines, without the need for any usual backup. Altough a Spell fluct or two may help of course.

I do not know if BioWare did this on purpose, but playing through their Singleplayer campagin (including both expansions, the original one does not contain a lich) - the game feels considerably easier than the well-known Baldur’s Gate series. Maybe the newly adjusted D&D 3.5 rules are the cause, maybe the mediocore singleplayer campaign is. Maybe neither. I was playing as a rogue and merely defeated a demilich using a timestop scroll (which did not stop him but his critters), a couple of higly-enchanted dagger swings and poof, the treasure appeared. Which was junk by the way, compared to Kangaxx’ ring!

Besides the different Forgotten Realms campaigns, there are plenty of liches roaming in other video games. For instance, Might & Magic VIII: Day of the Destroyer. Instead of getting to kill one, your many game hours will once pay off. At least after finishing the Lich promotion quest and having a worthy Necromancer in your party, that is. Every class (which you were not able to pick yourself except the main character’s - in contrast with previous Might & Magic games) can be upgraded to a more devastating one, using trainers spread across the realm. They give you special promotion quests which require you to fetch a specific artifact somewhere hidden in the depths of a high level dungeon. Once you completed the quest, your necromancer’s avatar even changed into a cool looking undead face - hell yeah!

Admittedly, class promotion quests are not new to Might & Magic VIII. But the rather uninspired class picks in previous games bribed me into playing version eight of the series. Who wants to play as a measly Druid if you can have the power of a lich? And you’ll be respected among your friends for having that coolness factor upgrade. Just Kidding.

Many reviews state VIII is not a great addition to the Might & Magic series, but in the end - it’s all worth it. Heroes of Might & Magic also featured several Liches and the newly released Dark Messiah will traditionally too. Yes yes, this is the part where we talk about Blizzard’s so-called amazing achievement by dumping a talking lich into the main story of Warcraft III: Reign of Chaos and it’s expansion pack. Blizzard did play safe here by not adding any additional tasks to the lich’s already-too-long list: as a plain Hero, you can cast various powerful long ranged spells and you’re physically the weakest among your brethren. Nothing special to told really, why am I still jabbing about it? Well it should at least be mentioned since Warcraft is still too popular for it’s own good.

While we’re at it, it does not hurt to bring up the great memories of Secret of Mana, fighting against the Dark Lich, which returned as big boss in Seiken Densetsu 3. Sadly the latter never even made it to the USA officially, so us left-alone Europeans can go ahead and insult the whole console video game industry again. Anyway, the Dark Lich traditionally represented a couple of badly stitched together bones with superhuman size (altough that was not the case on many PC liches - must have been a weird Japanese obsession, the size of bosses). The appearance of both bosses are still consequent with the plot: they should scare the hell out of you - exactly as planned -, since they represent one (if not the) of the final enemies in the whole game. Secret’s Lich resembles maybe a tiny little bit to Nintendo’s mad Ganondorf at full rage. Well, the color design and overall feel does. Compare one of those bad guys with Wizard Work’s creations and statistics: most (Japanese) console end bosses rise from the background, waving their hands like mad, mostly coupled by chasing you over the screen - if you can still separate your characters from the boss by looking at the pixels… Tradition, I guess.

I might have gotten ahead of myself. What is an article about beastiary without a reference to one of the Final Fantasy games? And what could be better than a Lich featuring as boss in version I? It resembles a skeletal sorcerer, and thus has powerful magic. Yawn, they surely could have been a little more original? However, since a lich is by definition (well usually) undead, applying the basic Final Fantasy magic rules results in vulnerability to fire and healing magic. Healing magic - check. Fire? What the hell? It gets even better. In Final Fantasy Tactics, the lich creature is composed of dark-elemental summon magic. Definitly Sounds fancy.

What did we learn so far - - Liches played the boss since 1987. - (Japanese) Console game liches are usually bigger and weirder anime-ish versions. - Final Fantasy is just plain stupid. Whoops! Hehehe.

To be continued! If you would like to say something about your lich encounter in a game, do so using the Discussion thread, or using e-mail .